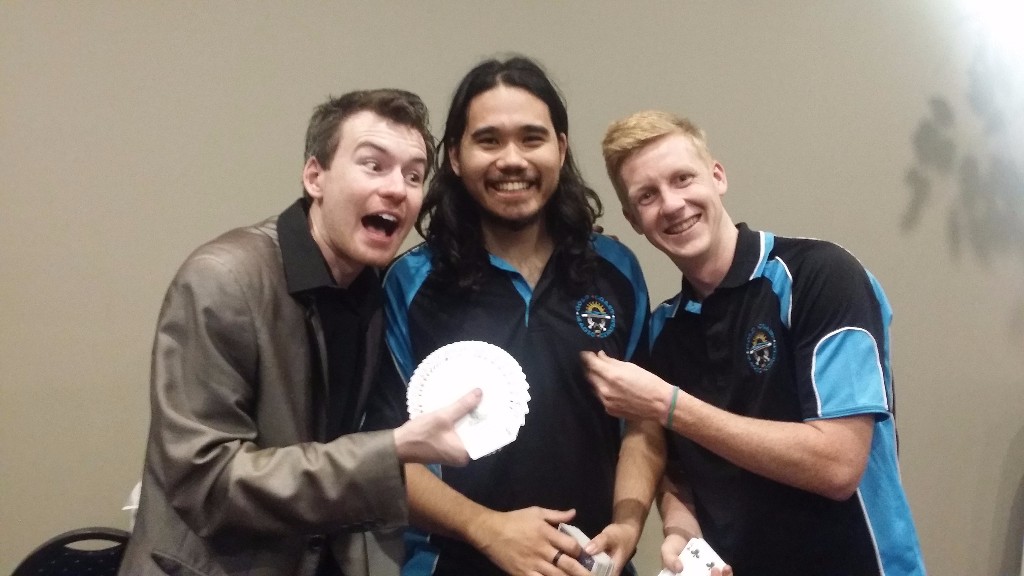 Joel Howlett captivated members once again with his entertaining and very delightful lecture.

A very engaging and enjoyable magic workshop and lecture had the room filled with much warmth and thrill from the good-natured, comical and very approachable Joel.

Join us for our General Meeting and Easter Night 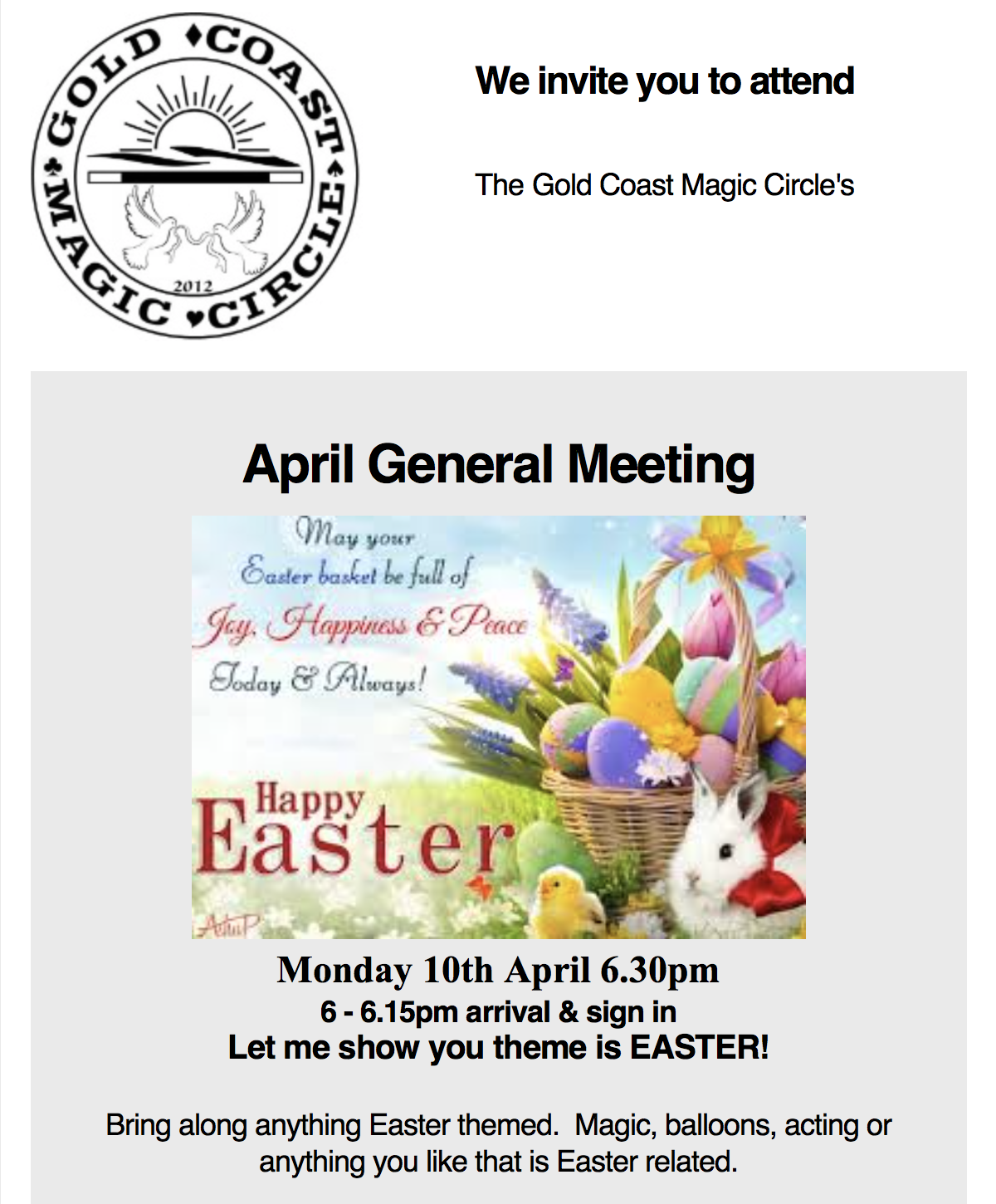 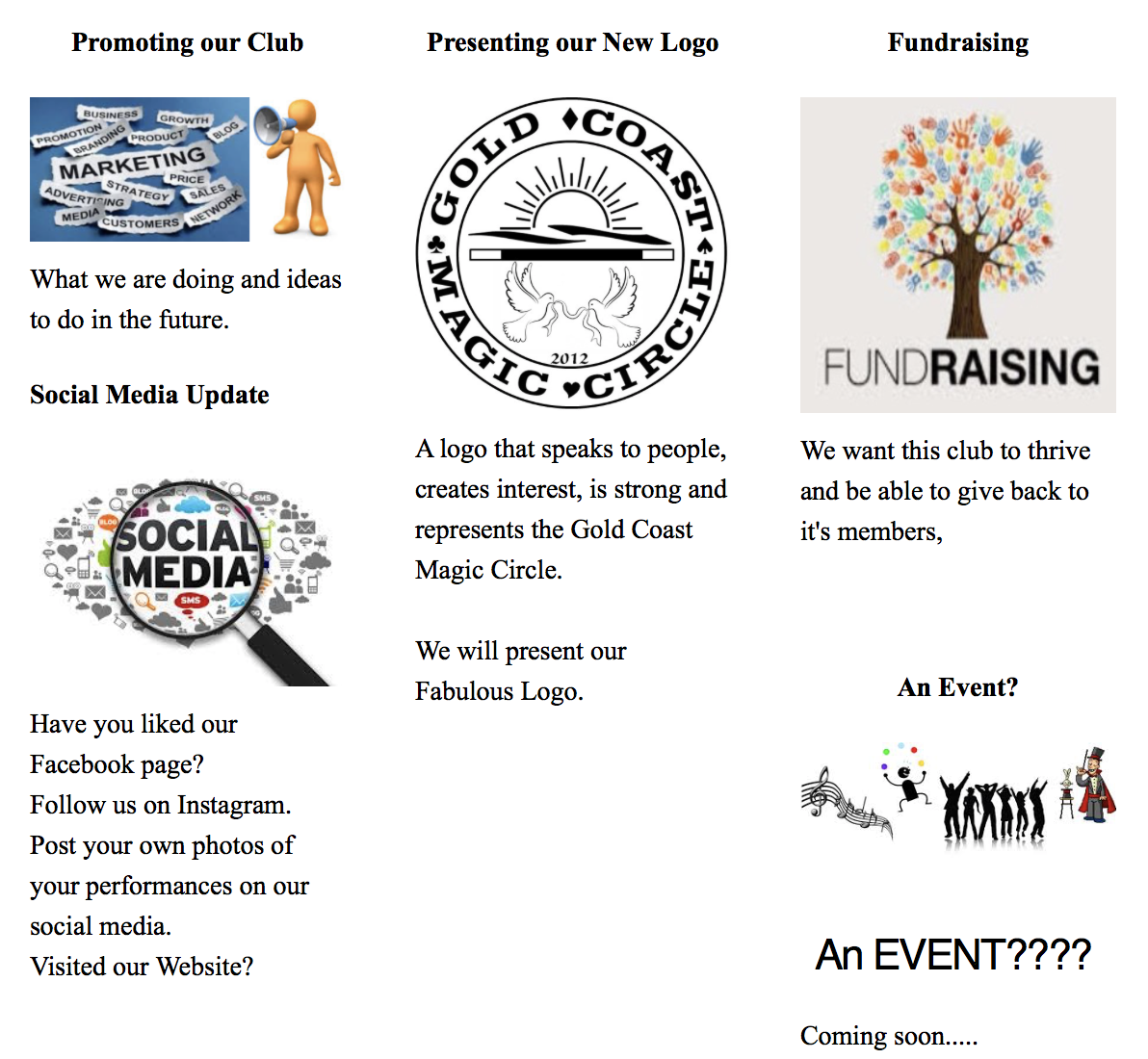 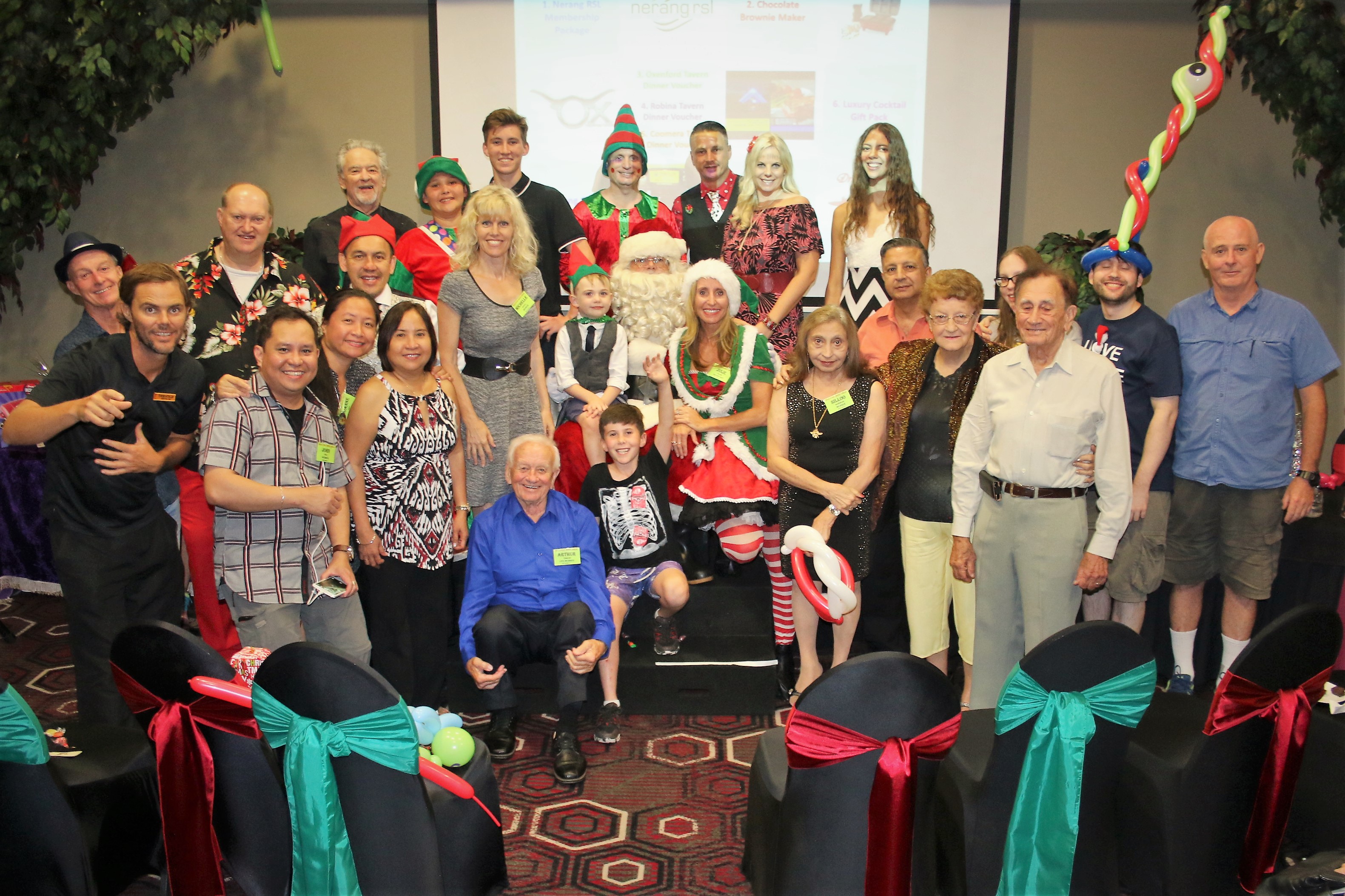 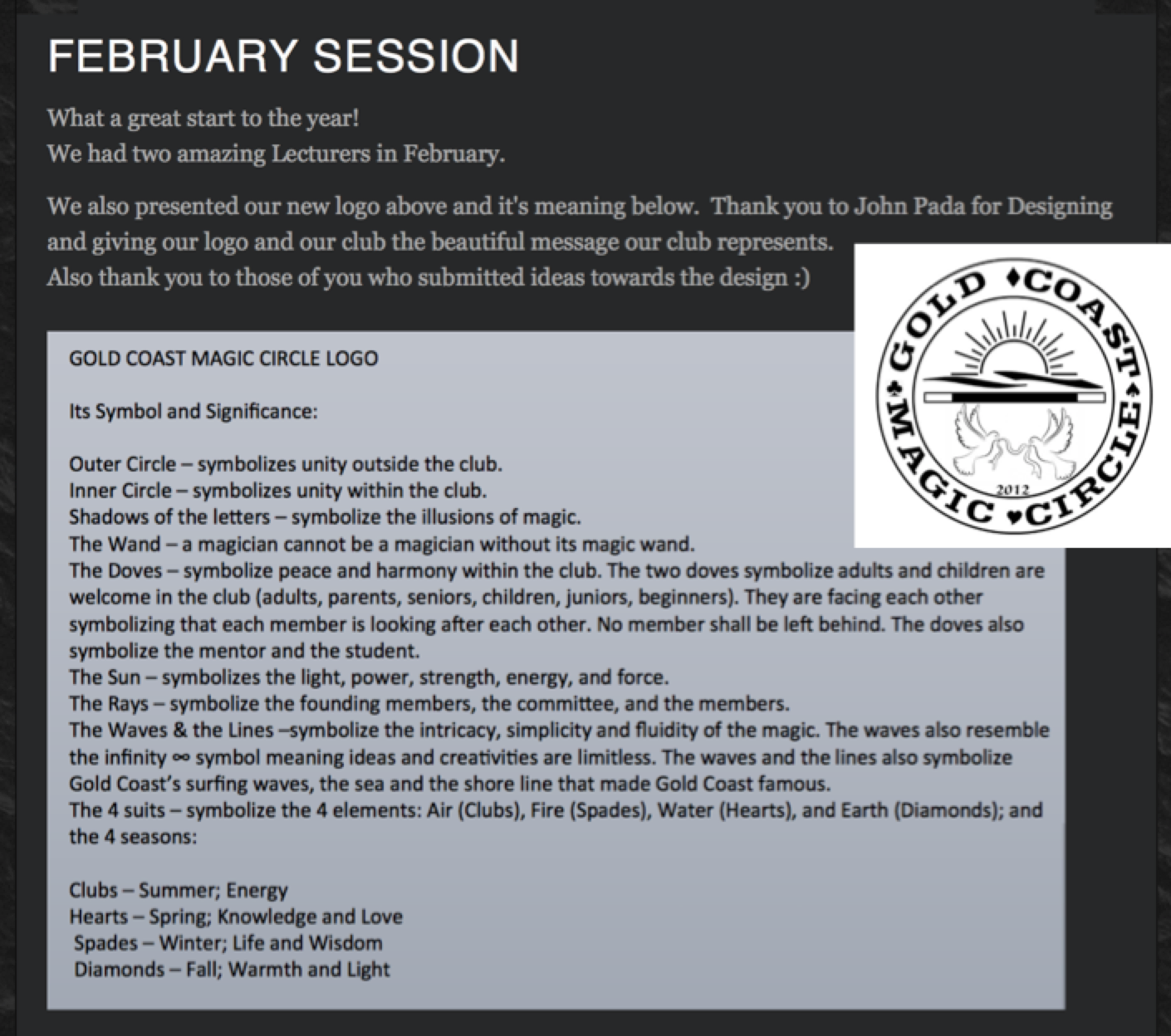 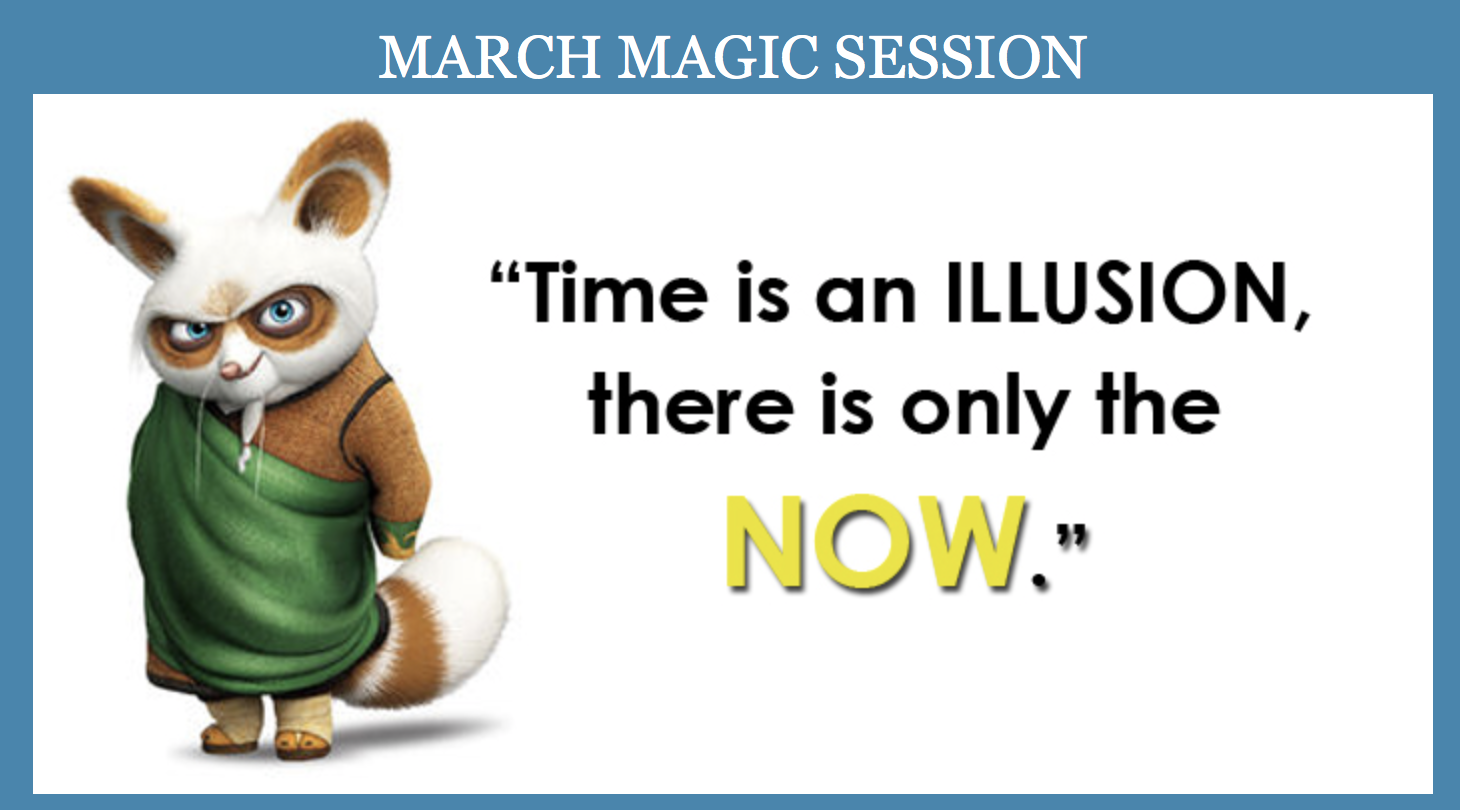 The March Session was fantastic with a WONDERFUL Workshop with the ONE and ONLY Joe Lewis.

Thank you Joe for your wisdon, knowledge and incredible presence!  We loved it!!!! 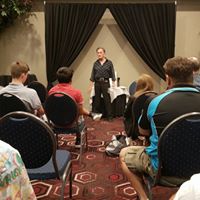 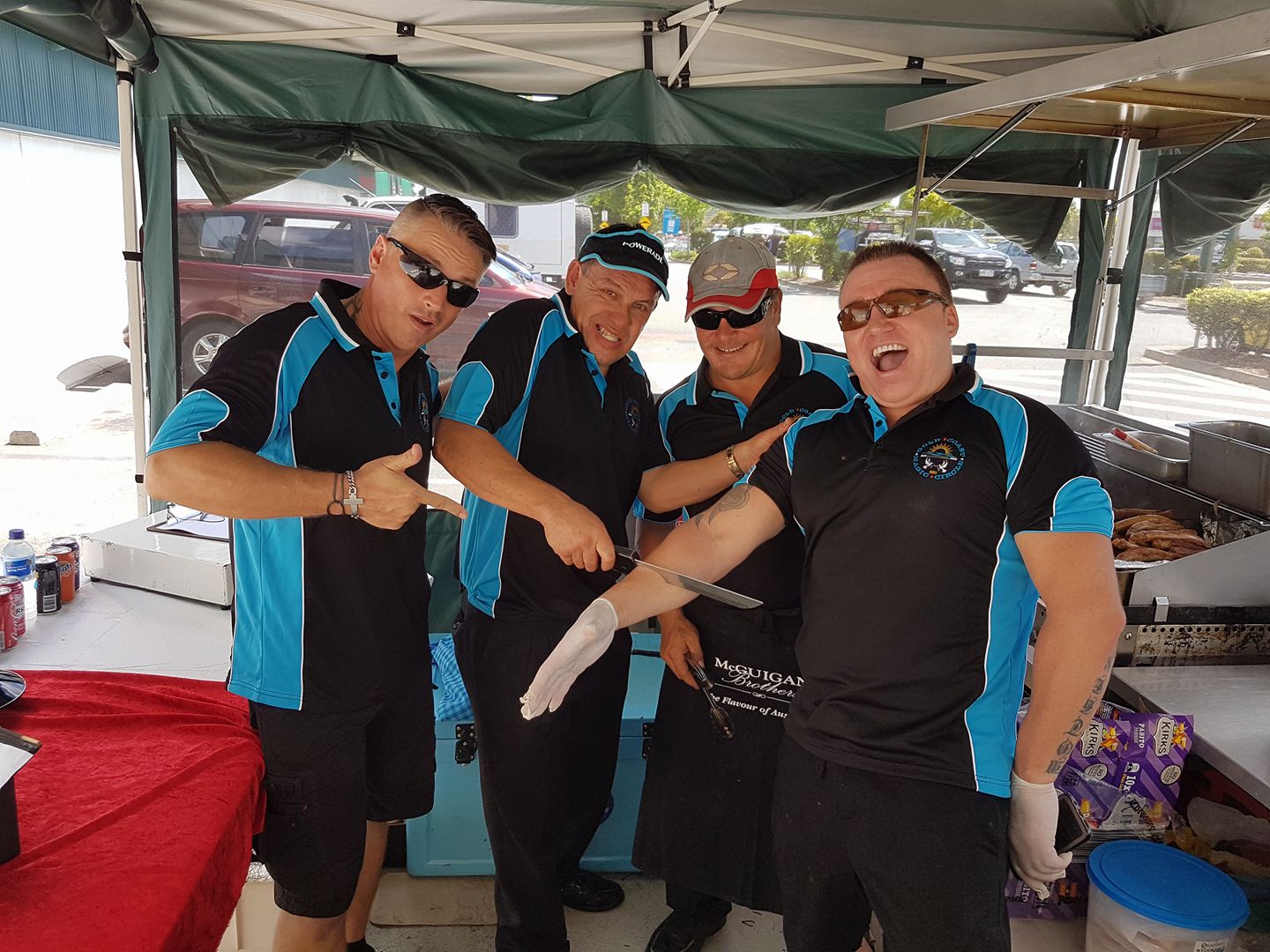 The Boys look so cool in their New Gold Coast Magic Circle Shirts.  They had a success and fun day at Bunnings Nerang.  Looking forward to the next one boys!!!!!

Presidents Report General Meeting 10th October 2016 Thank you all for attending tonight’s meeting, I will keep my report brief so we can get to the fun part of the evening with our performer. I would like to give my acknowledgement to the founders of this club from when it started in 2012 and to all past and present committees and volunteers on their dedication and works to insure we keep a solid footing for the association. Change is never easy and certainly never quick therefore I don't expect to implement all our ideas and strategies in one term of office, but I do know we have the right combinations of talent on the committee who have sincere dedication for the growth of this club into 2017 and beyond. To date we have been focussing on operational procedures that are in line with our constitution. This has involved us becoming acquainted and for some, reacquainted with correct protocols. We have collectively created some new administration tools including formatted documents and new processes and procedures that have not only set a sound benchmark, but also given streamline operations for the current and future committees. We are reviewing the website and social media platforms so the association can take full advantage of the potential these tools hold. The association is now insured with a public and products liability cover. This allows us to apply for funding that we previously could not apply for including Bunnings BBQ’s and local and government grants. Plus it also allows the club to hold external events and hire facilities. We are reviewing and trialling new formats for the newly named Monday Magic Sessions where we want you the members to get the most out of. In doing so it is encouraged that you all have input here and a quick email to Julie the secretary with such is very welcome. The association’s logo is also under review and again we are open to all feedback. We have set up a PO Box in Nerang and the one club email address to ensure we are viewed upon with consistency and professionalism. The current committee are an extremely motivated and diverse bunch bringing a wealth of resources and energy to the GCMC that I am very proud to be a part of. There will always be variations of opinion, differences and debate and there's nothing wrong with that because there are no short cuts to any place that's genuinely worth going to.